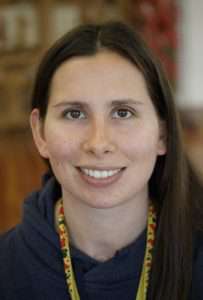 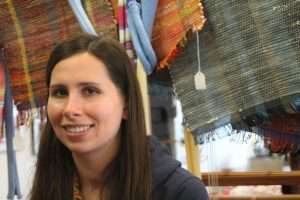 If not there, check out the sewing machines in the back room, where you might find her second creative love – one passed down by her grandmothers, whom Kendra said sewed love into all her dresses and dolls.

If Elizabeth “Lizzy” Case doesn’t win you over with her big smile and her dancing (and we bet she will), you can’t help but laugh with her over silly jokes. She works in the Studios’textile fabrication line, brushing on the acrylics that will be used in the Studios’ signature table runners, placemats and rugs. She’s especially drawn to green and pink because they are, in her words, “happy colors.” 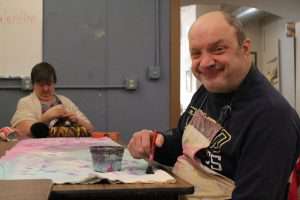 Roger “Mike” Clark is an acrylic artist at Sunshine. Mike loves routine, but he’s among the first to help around the Studios when asked, and he keeps everyone laughing. In his free time, he loves the Three Stooges, sports, puzzles and NASCAR. 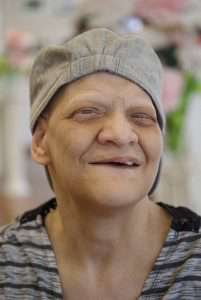 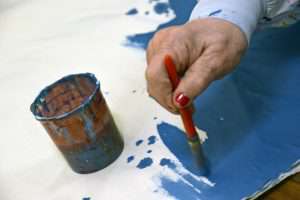 Christine “Chrissy” Hilkert’s is one of Sunshine Studios’ greeters, and her hugs are as joy-provoking as her big smile. When she’s not playing hostess, you’ll find her m ost often at the back table brushing on brilliant or pastel acrylics onto the cloth that will be used in Sunshine’s textile art. 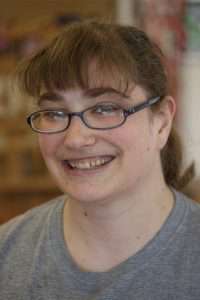 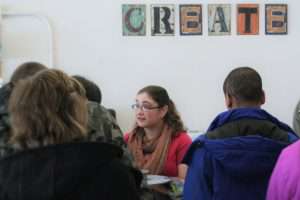 Melissa Jender is a veteran artist at Sunshine Studios and she’ll often lead the tour through the studios. She primarily works with acrylics, and recently, one of her prin ts was presented to Little Flower Catholic Church to mark the growing friendship between Sunshine and the parish as part of Sunshine’s Amazing Happens Here Ever Day campaign. 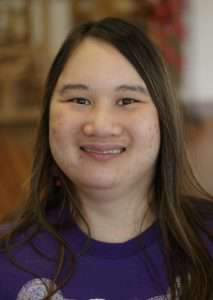 Erica Janice Martin finds her passion in clay, but that’s far from her only talent. She loves to draw teeth, the shapes of the mouths and the diversity of smiles they form. She is inspired by the good feelings from close friends and, in her spare time, loves cooking shows, traveling and exploring. 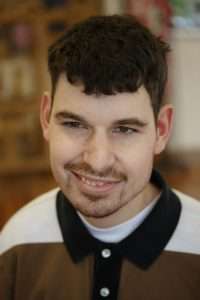 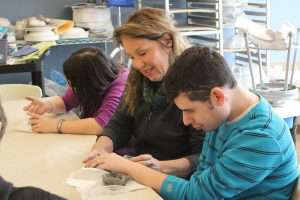 Corey Pappas is guided literally by the feel of his art. He primarily works in clay and ceramics, though he loves painting as well, refusing to allow his blindness to fence his creativity. He’s inspired by a previous art teacher and he loves to remain active as well, b urning off energy with music, baseball, dancing and bike-riding. 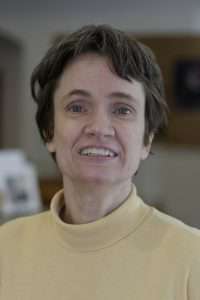 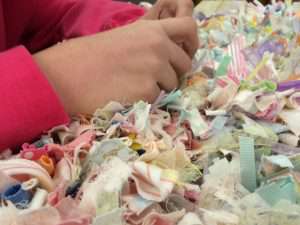 Marnie Pilzecker works in textiles as part of the Studios production line that upcycles T-shirts into brilliantly-colored rugs. In her spare time, you’ll find her working animal puzzles or dancing and singing to just about any pop music. Go ahead. Turn on the radio. She can name nearly any artist. 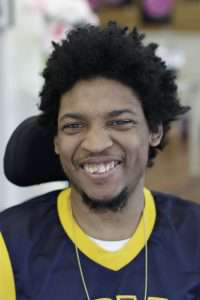 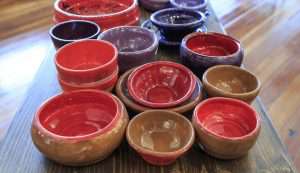 Eric Smith works with acrylics and clay, but also has a past in woodworking. He’s inspired by the generosity and kindness of close friends. He loves the diversity of art projects at the Studios. And a Toledo native, a fan of Ohio State and the Cleveland Cavaliers. 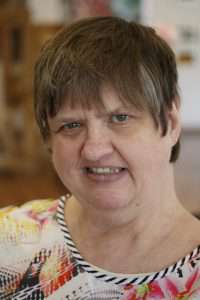 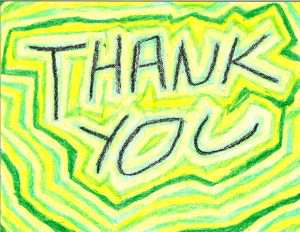 Sandy Loyer is a woman with many interests –cooking and game shows and drawing and knitting.
Additionally, she’s often cutting strips of cloth for Sunshine Studios textile art. For years, she has converted her passion for lettering into beautiful name tags and cards. Give her your name. You’ll be amazed at what she’ll create with colorful crayons and a bit of time.